There are several resources that you will need ready-to-hand before you start to break things. Here’s a list of the basics:

First things first. I recommend that you write your glitch in a word processor like Microsoft Word. This will help you better craft your glitch. It helps for a few reasons. 1) Much of this form of glitch-writing relies on stackable marks–what we call diacritical marks. Diacritical marks are typically used as “accent marks” over vowels. They indicate an alternative form of enunciation to those typically found in the English language. (For an explanation of some of the most common diacritical marks employed in the English language with their Unicode encoding, see Pinyin.info.)  Using Word, rather than Twitter’s text box, will help you better organize your glitch, allow you to save your writing at any point, and act as a playground for the writing process. Further, Word used to have an even greater function. Prior to the June 21, 2016 9.0 Unicode update, it was possible to stack diacritical marks in Word and copy them to Twitter as a single character. Here is a screenshot of what this feature of the writing process looked like: 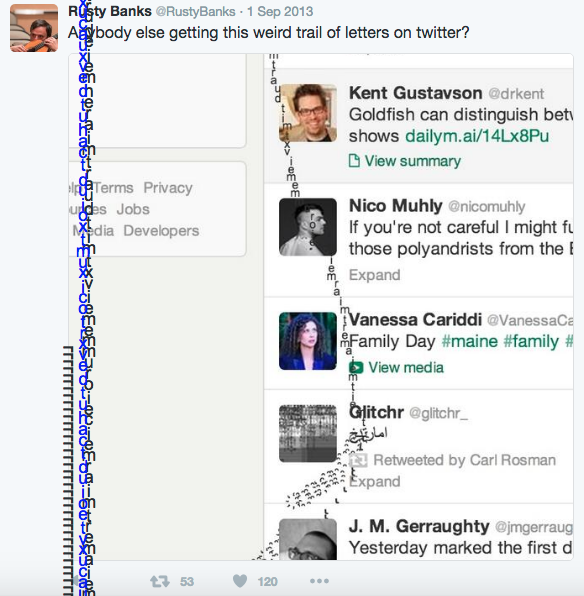 In the wake of the update, any interface you use to create stacked glitches will count each mark as a new character, limiting your glitch’s character count. 2) Twitter doesn’t recognize every Unicode encoding for every possible letter, number, and punctuation mark for every language. I’ve found that Microsoft Word can visualize more Unicode encodings than Twitter. This is important if you desire to break text boxes on other social media platforms. 3) Microsoft Word allows you to change the orientation and distance of your text, allowing for a more “sculptural” quality inherent to this type of writing.

Ok! Open a new Microsoft Word document and activate the Unicode Hex Input on your keyboard. Once you have the Unicode Hex Input activated, open your Unicode chart and scroll to the section labeled 0300, “Combining Diacritical Marks.” The 0300 – 0360 range of encodings gives you the largest set of stackable characters within the Unicode chart. Feel free to explore other language subsets and options, but be sure to remember that the characters that range from 0300 – 0360 allow you to stack. This feature is important for two reasons. 1) Stackable characters are necessary for exceeding the spatial limits of the text box (both vertically and horizontally). Where we typically think of the text box on a given interface to be a self-contained compositional environment, diacritical marks reveal this to be a farce. 2) Stackable characters allow you to move seamlessly between linguistic systems as you also combine them. Think about diacritical marks like digital-linguistic glue; they allow you to combine characters from a multiplicity of natural languages in order to communicate beyond their individual confines. These marks are what often give the practice of glitch-writing its sculptural quality.

Once you have decided which characters/linguistic systems you’d like to play with, type a character’s Unicode encoding in Microsoft Word. For Macs, you can do this by holding down the option key while typing the encoding. For PCs, hold down the Alt key, press the + key, then type the Unicode encoding.

After a few cycles, things will start to get weird. When you add letters and diacritical marks to your Word document, the diacritical marks stack toward the viewer, rather than vertically or horizontally. It will look jumbled, but don’t worry, you’re breaking things the right way. Your glitch should look something like this:

While it is difficult to detect now, many of these marks and characters will reorient themselves within the text boxes of each social media platform you might place it in. Here is an example of what this glitch looks like on Twitter:

Here it is on Fold: 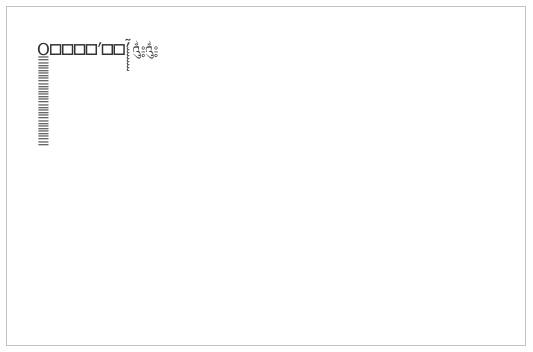 This is what it looks like if I copy and paste it directly into my current text box:

This is what is looks like when I write it:

Remember, different digital platforms will visualize your glitch differently. Not all digital platforms recognize the same Unicode sets, nor do they situate text in the same way. (If you have ever sent an emoji from your iPhone to a friend’s Android and had it change in the process, you know what I’m talking about.)

At this point, you’ve been supplied with the basics. Be as creative with the process as you like. You will inevitably fail, but that’s kind of the point.

One thought on “Glitch Writing Tutorial”