The following paper will be presented a the Berkeley Conference on Precarious Aesthetics, fall 2015 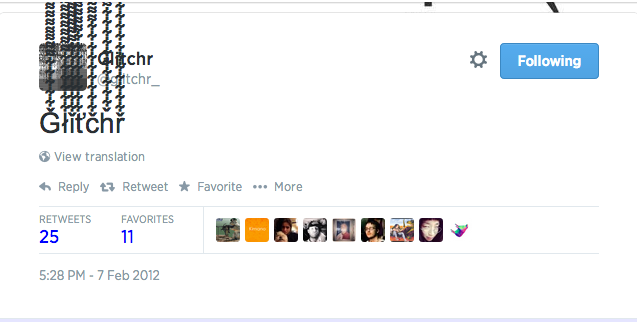 Glitch art is an aesthetic of failure. It is created to reconfigure the function of the screen, disrupt harmonious noise, and de-compose the aesthetic unity of still and moving images. Glitch art is also a practice of technological conversion and translation, but one that forefronts the precarity of ever-changing hardware and software, digital and analog documentation, new and old media. Alexander Galloway’s thoughts on digital aesthetics and translation capture this mode of precarity in particular. He claims that visualization of any data, aesthetic or otherwise, relies on an arbitrary set of translation rules and manifests in an arbitrary visual form. At the same time, Galloway argues that the “size of aesthetic space is one,” meaning that digital media rely on and produce a consistently homogeneous interface.[i]

I focus on the work of three glitch artists in particular in this paper, all of whom highlight glitch-failure and precarity as a practice of digital translation, but also disrupt the notion of the homogeneous interface: Glitchr, Rosa Menkman, and Jon Cates. The work of each artist affirms and critiques Galloway’s arguments above: it relies on various digital media to create new modes of communication. Glitchr, made clear by his first tweet above, mobilizes the glitch aesthetic to alter the function of the textbox across various social media platforms. He combines and stacks various diacritical marks to create architectural doodles, fundamentally altering our most common forms of digital communication. Menkman, famous for both her physical and digital glitch exhibits, argues in her seminal Glitch Studies Manifesto: “Once the glitch is understood as an alternative way of representation or a new language, its tipping point has passed and the essence of its glitch-being is vanished. The glitch is no longer an art of rejection, but a shape or appearance that is reorganized as a novel form (of art).”[ii] Jon Cates follows this notion with his work on animated .gifs, calling glitch art the “poetic embrace of noise and error.”[iii] The .gif, for Cates, is a form of dirty media that embraces the precarity of our techno-social world. Each artist’s glitch art proffers a more fundamental criticism of technology and art, however. Glitch art certainly points out that the visualization of data is arbitrary, as is a particular set of translation practices surrounding it, but this does not produce a homogenous interface. Glitch art produces modes of communication about which we are yet able to speak, rendering our current technological modes of representation failed experiments in homogenous techno-social interaction.